There are quite a few popular neural imaging modalities in use today. However, they vary in what they measure, level of invasiveness, and spatiotemporal resolution. Functional magnetic resonance imaging has become the dominant technique in recent years because it is noninvasive while also providing decent spatial and temporal resolutions.

During an fMRI experiment, brain images are acquired over time while the subject is exposed to certain stimuli or performs a set of tasks. Differences in the measured signal between each scan are used to infer activation in the brain related to stimuli or task-performance. Inferences can also be made about how different parts of the brain work together or about disease states. Statistical procedures are used to make these inferences. However, modeling fMRI data is challenging because the measured signal is weak, there is a lot of noise present, and there is complex spatio-temporal correlation between different parts of the brain and successive scans. The data are also enormous. Usually 100-200 scans are taken per subject and each scan is divided into at least 100,000 parts known as voxels. The experiment may be repeated multiple times for the same subject and also for multiple subjects. It is not currently feasible to completely model the spatio-temporal dependence in fMRI data. Generally an autoregressive order 2, AR(2), temporal correlation structure is used and random field theory (RFT) correction is used to account for spatial dependence.

The protons in oxygenated areas produce stronger signals than deoxygenated areas. The recorded signals are then used to create a three-dimensional image of the brain. A grid is superimposed on the brain image so neural activity can be mapped into small cubes called voxels, which are usually about 3mm x 3mm x 3mm. A typical MRI scan will consist of at least 100,000 voxels and each voxel represents thousands of neurons.

In an fMRI experiment a stimuli will not typically just be applied once but multiple times in a block or event related design. A predicted HRF for an active voxel in such an experiment can be created by convolving the canonical HRF with the design parameters. A visual example of this can be seen below. 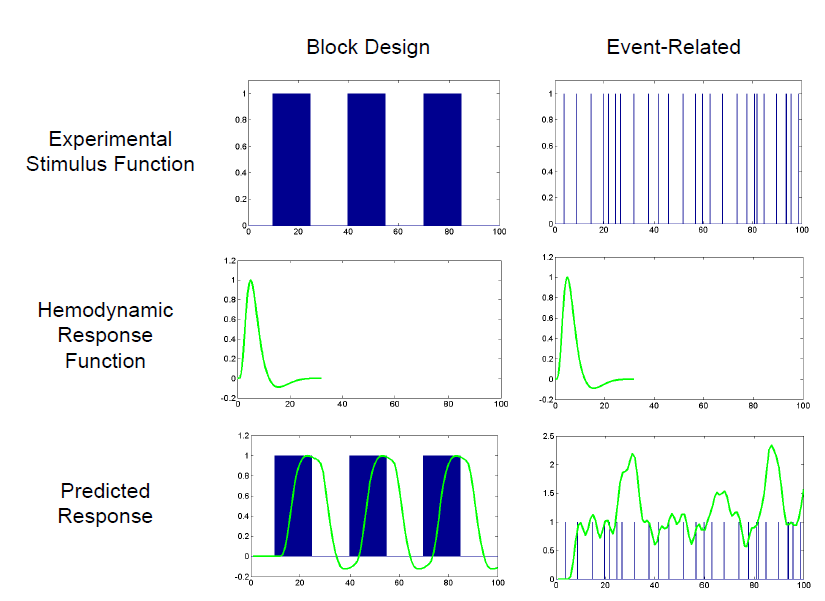 If there are multiple stimuli or tasks in an experiment then a separate predicted HRF is created for each of them. The measured BOLD response is then compared with the predicted HRF to check for voxel activation.

The MR signal usually contains many elements that are not of interest. It is important to remove or model them since the hemodynamic response is very weak. The main sources of noise in fMRI signals are system noise and physiological noise.

System noise is created by the MR hardware, mostly due to magnetic field created by the scanner drifting over time or not being spatially uniform. This type of noise should either be removed during data pre-processing or be included covariates in the statistical model. Generally two drift parameters are included during modeling to account for scanner instabilities. Physiological noise is created by head movement, breathing, heart beat, respiration, fidgeting, or making physical responses such as button presses for task related experiments. Heart beat and respiration are most often left unaccounted for though sometimes they are removed during pre-processing using filters or included as covariates in the statistical model.

However, signal distortion due to motion is usually corrected for during pre-processing using transformations -translation, rotation, scaling, and shearing (a depiction is shown below). The motion correction parameters for each subject are then usually included as covariates in the statistical model. 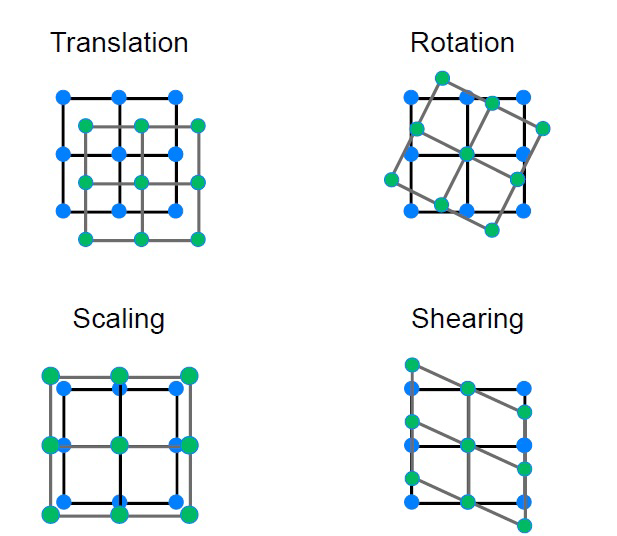 Common objectives of fMRI analysis are localizing regions of the brain activated by certain stimuli or tasks, identifying neural networks associated with different functions, and diagnosing disease states. All of these goals involve identifying voxel activation given specific stimuli or tasks.

Most commonly a univariate LM approach is used to identify voxel activation. A linear model is used for each voxel individually to test whether or not it is activated by the given stimuli. Assuming that the data consists of a brain volume with N voxels that is repeatedly measured at T different time points, the vector of BOLD responses from voxel i over scans 1 through T can be modeled as,

Using Dr. Lindquist’s descriptions of the statistical model in both his Coursera course and The Statistical Analysis of fMRI Data, the design matrix, X, can be partitioned into the different types of covariates used. The following is a general partitioning including all covariates that are reasonable to be included in the model.

The covariance matrix, Vi, depends on the type of auto-correlation structure used. For example,

Data from an fMRI experiment conducted by Dr. Rees under the direction of Dr. Friston at the Functional Imaging Laboratory (FIL), University College London were used. The purpose of the experiment was equipment testing and creating a dataset for educational purposes, which is our purpose as well. The experiment consists of whole brain 3D images from 96 scans, each divided into a 64x64x64 grid, that is, 262144 voxels. Each voxel is 3mm x 3mm x 3mm.

The experiment has a simple block design alternating between rest and a bi-syllabic auditory stimulus presented binaurally at a rate of 60 per minute, starting with rest. Each block is 42 seconds long consisting of 6 scans, each taken at 7 second intervals. The change in BOLD contrast from each voxel is measured. The purpose of our analysis is to determine which voxels are activated by the auditory stimulus.

Preprocessing is done using SPM in Matlab. Steps from the SPM Manual are followed. Animation of the signal across the 96 scans across each slice after preprocessing is shown below :

To detect voxels activated by the auditory stimulus, a few different models are fit to the preprocessed data:

Using each model, T-Statistics are calculated for each voxel. The familywise error (FWE) Threshold from SPM is used to correct for multiple hypothesis testing. The Test Statistics can be found below :